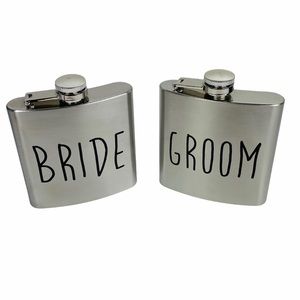 Home Essentials Bride & Groom Matching Set of 2 Stainless Steel 6 Ounce Flasks. Celebrate the day right and share a drink with your soulmate. These flasks will fit perfectly in a pocket or handbag for easy travel, so you can keep the party going past the honeymoon. Perfect gift idea. Holds 6 Ounces. Cool beverages only. Hand wash only. Smoke free home. Brand New Condition.
|||

Walter Wellmen attempted first to reach the North Pole, and then to cross the Atlantic in an airship called The America–it is the second of these trips where Kiddo found fame. Kiddo’s story is captured in the pages of Wellman’s The Aerial Age: A Thousand Miles by Airship Over the Atlantic Ocean (1911). It is most poetically written by Wellman himself, a bit comes from the notes of laconic wireless operator Jack Irwin, and everything most sympathetic from the journal of Simon Murray, ship navigator. It has been told before in snippets on purr ‘n’ furr, and aviation humour. But here it is in its entirety for, I believe, the very first time as told by the crew in a series of gripping excerpts.

END_OF_DOCUMENT_TOKEN_TO_BE_REPLACED

We saw the cathedral long before we reached Ripon the first day. We emerged from our visit to Fountains Abbey and the water gardens up to the long road out of the estate. The cathedral massed there straight ahead of us on the horizon, a shining presence of stone.

It looked like we could walk straight there, I wanted to. Signs warned against this however. Private road, private property. We had to turn left. We never got to see the cathedral quite like this again.

But in our short time in Ripon we saw it countless times, from many angles. It stands tall on its hill, an oddly solid weight of stone trying to soar. Staring up at the great main face of it praised by Pevsner, it feels almost like a different building altogether. Razed to the ground several times over its 1300 years of history, the power of kings and church rebuilt it reincorporating old patterns–built it higher, bigger, but never finished it. No flying buttresses support its rising. A beautiful wood roof arches over the nave and quire in a still immense echoing of cathedral space that made my heart sing.

END_OF_DOCUMENT_TOKEN_TO_BE_REPLACED

A small group of riotous monks moved to this valley of the Ure, expelled from the Benedictine abbey of York in 1132. Joining the Cistercian order shortly thereafter, they built the abbey low and sheltered in these hills, folding their religious beliefs into the stones and their humility before God into the landscape. It lies almost invisible until you are directly upon it.

I don’t think you can really see this aspect of it unless you walk there, as others did long ago. Even from How Hill, once a Saxon pilgrimage spot itself and now a substantial sort of folly, the abbey’s great tower is all that can be seen and looks simply like a parish church. I did not believe what I saw could possibly be the abbey. I have no picture in that direction, preferring the light playing across the rounded hills to the east, and the flocks of birds white against the dark earth being ploughed.

END_OF_DOCUMENT_TOKEN_TO_BE_REPLACED

Found this quote in Patrick Baker’s The Cairngorms. William MacGillivray has transformed my understanding of both being a walker, and the value of the British Museum.

MacGillivray’s commitment to life as a field naturalist was whole-hearted, and as a result he became a prodigious walker. At the age of 23 he decided to visit the British Museum in London, walking a circuitous route from his home in Aberdeen, covering a remarkable distance of 828 miles in just eight weeks, an average of almost 15 miles every day.

Raised on Harris, MacGillivray (1796-1852) was rather extraordinary, not just as an ornithologist and writer of natural history, but maybe possibly one of the first professors to undertake field trips. Awesome. Read the riverofthings blog, there are way more fun facts, like there is a hooded crow named after him because he kicked it with James Audobon and more. Much more. As you’d expect from anyone who walked 828 miles to the British Library.

I’m not really one to do a funny challenge — life is challenging enough. But somehow this one from wool& inspired me: wear the same lovely merino wool dress every day, I mean EVERY DAY, for 100 consecutive days.

I suppose I’ve been thinking a lot about cutting consumption. I’ve been trying to grow veg and trying to get ever closer to being zero waste. That has taken time and thought and research and work, so I thought maybe it would be nice to save time by never thinking about what to wear. Tons of women have done it, and I liked reading what they wrote, so I’m writing this.

They talked about it contributing to a life change and new ethics of fashion in light of the many injustices and climate change. I rarely buy anything new for these reasons. But I also liked how they talked about it helping them think less about their appearance, worry less about what others thought, enjoy their jewelry and scarves and belts more, save money/buy less and many other cool things. On completion, Wool& promises to send you $100 (or €) towards a new dress that you can also wear day in and day out.

The dress felt lovely and smooth, even with my sensitive skin. It really did adjust to temperature, and I was cool or warm as needed. It totally wicked away moisture and didn’t smell. It did not require washing often and dried really quickly. I never had to iron it. It was great for hiking, and I have walked many many miles in it. It is maybe a little shorter than when I bought it (a longer one would have been nice), but overall looks good as new, which is actually quite amazing. I only had one major spill to be fair, and washed it out right away. But I’ve never had a dress that could do all that, and I loved it.

END_OF_DOCUMENT_TOKEN_TO_BE_REPLACED

We saw many sides of Ingleborough, but the slopes closest to Horton in Ribblesdale we walked twice. The pavements of Moughton scar are incredible in both mist and sun, the first day the clouds and mist dropped down on us as we picked our way across the limestone of Moughton edge.

But on the this first day of 2022 we went walking higher up Ingleborough and the sun emerged now and then to light up stone and grass and sky. It was a day of wonder. May the sun continue to light up this year of changes and beginnings.

Equally glorious, the millions of years of ice, water, sand and seismic activity that created this place, that brought us here. My geology book had a most lovely illustration.

END_OF_DOCUMENT_TOKEN_TO_BE_REPLACED

Our final day of 2021, a hard year, long year, covid year but also a year that brought great change for 2022 and many good things. The day dawned wet, with low cloud. It has been raining heavily. Water thundered down with wild force enough to take the soul and cast it up into the air light as foam.

I can still hear it in my ears.

END_OF_DOCUMENT_TOKEN_TO_BE_REPLACED

Such a splendid walk today, although we weren’t sure about weather. The wind had finally died down, but we left the cottage in a fine drizzle to catch the train down to Settle. An incredible breakfast at the Naked Man Cafe and straight up the hills.

The sun graced us, lighting up the world below.

It only appeared now and then, but drew extraordinary colours out of land and sky. Blues I have never seen and clouds like feathers that touched the earth.

END_OF_DOCUMENT_TOKEN_TO_BE_REPLACED

I miss going to Arizona to spend Christmas with my mum, but this lovely cottage, Fawber Cottage, in the Yorkshire Dales is a good second best. Just released from Covid quarantine — I caught the stupid virus at our Christmas lunch, which was also doubling as my going away lunch.

The irony is not lost on me.

So I was stuck home until Christmas Eve, and even with trains cancelled and delayed, managed to get to New Houses to meet Mark in time for a walk. Just up the road from Horton-in-Ribblesdale, it is beautiful here. We walked further up the dale, up to Sell Gill where the stream pours into the earth, swalled up by the cave beneath the limestone.

The wind has surely been wuthering though.

END_OF_DOCUMENT_TOKEN_TO_BE_REPLACED

I enjoyed Litvinoff’s A Death Out of Season immensely, with its story of anarchists and revolution moving between Poland, Russia and London’s East End. It tells the story of the siege of Sibley Street, but I hate giving even that much away. They are characters elsewhere reviled that will stay with me a long time, their dreams for a better world brought alive here with no little tenderness. I also loved this description of the differences between tasrist Russia and England, though England still brought death in the end.

The difference was measured barometrically, in the gradient of fear. In Warsaw, the suitcase he carried was filled with sedition. He would have already edged towards the door, prepared if necessary to abandon it and run. Here it was so much printed merchandise, legitimate stock for Hoffman, the bookseller, who openly displayed revolutionary tracts in half a dozen languages which elsewhere were hidden under floorboards and passed from hand to hand under cover of darkness. Special Branch detectives badly disguised as working-class intellectuals dropped in to collect a pamphlet or two and take note of Hoffman’s shabby clientele, some of whom were reputed to be the most dangerous agitators in Europe. They went away smiling, smug, relaxedly British. What a country, Murontzeff thought almost affectionately. The Wiezence prison had changed him a little. For the first time in six years of exile he had the feeling of coming home. But the blandishment must be resisted. It wasn’t home at all: home was where the fear raged at fever point. (41)

The trashy cover is great too. All of this is a glimpse into the Jewish East End of immigrants and radicals, of poverty and struggle. Another reason to miss Stepney, but looking forward to reading the other two novels in the trilogy. I am so glad I found Litvinoff, and even more to receive these as gifts. It took Covid recovery to find time to come back to them.

Litvinoff, Emanuel (1979) A Death Out of Season. London: Penguin.